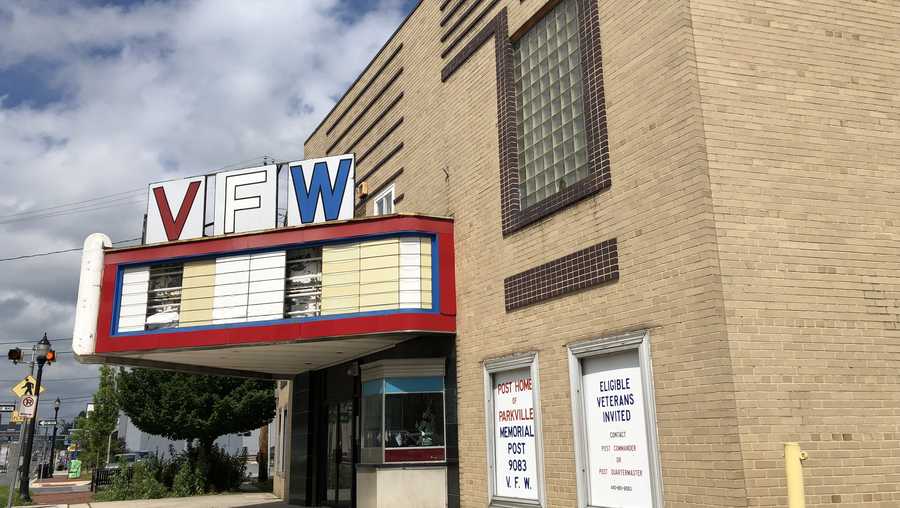 PARKVILLE, Md. — The stately, yellow brick VFW hall in Parkville has changed hands amid a decline in membership and the effects of the COVID-19 pandemic and is now set to be converted into a grocery store.

The landmark in the 8000 block of Harford Road first opened in 1946 and over the decades has been home to weekly bingo nights, crab feasts and spaghetti dinners as well as private rentals for anniversary and birthday parties. Its mainstay, though, has been a Cheers-like bar that offered a stable, friendly watering hole for veterans of World War II, the Korean War and the Vietnam War.

It has proudly housed the VFW Parkville Post 9083 since it first opened, said Victor Fuentealba, an Army veteran who fought in the World War II European theater and was an officer at the hall.

But the hall has been nearly totally vacant for two years and was sold last month to an investor who plans to convert it into a grocery store. A memorial to fallen World War II veterans will remain outside and get an overhaul, said Steve Verstandig, the new owner who is principal of Citywide Properties.

“It’s extremely old fashioned,” Verstandig said, of his acquisition that also included two other buildings flanking the VFW hall. “The hall’s original purpose was for meetings and bingo and they have used it for private events and fundraising. All the members now are between 90 and 100 years old and they had to downsize.”

Verstandig paid $890,000 for the portfolio and is planning to pump $700,000 in improvements into the VFW hall property and the area in the coming months.

He is in the final stages of a lease negotiation with a mid-size international grocer based in Texas that will open its second Maryland location in the hall space that stretches about 12,000 square feet. There are about 200 parking spaces in the rear of the hall.

The structure was first built to house the Colony Theatre around 1946, and its facade was made famous by director John Waters who filmed parts of his film “Crybaby” out front.

“It is a historic building and we are keeping the facade out front, of course,” Verstandig said, in an interview with the Baltimore Business Journal Friday. “We are going to spruce it up and put the grocer inside. I know that it was emotional for the veterans to sell it, but they wanted to make sure it was going to someone local and someone who had a use for a benefit to the community for years to come. They had received an offer for the property that was significantly higher from a brewery, but rejected that.”

The sale is Verstandig’s 20th property on the Harford Road corridor. A local investor, he is the son of Carl Verstandig, a veteran investor and developer who owns America’s Realty in Pikesville, which acquires Class B and Class C shopping centers across the U.S.

The deal is also the latest closure of a Greater Baltimore real estate relic from generations past. It marks the loss of another community gathering spot for veterans, private club members and neighborhood bingo players who used to frequent such places for gossip, storytelling and a shot and a beer.

The beloved Moose Lodge at 1911 Crain Highway in Glen Burnie was sold last year to Chesapeake Real Estate Group for conversion to a youth sports complex. The sale of the VFW hall in Parkville was made because private bookings had ceased during Covid and membership had dropped to about 260 from a high of 2,000, Fuentealba said on Monday.